Life is beautiful; a longer and healthier life must be paradise and a superior goal to achieve.

Therefore, anyone who rejects a ‘big idea’ in human development by  progressive science as extending the average lifespan to 140 years and more (see part I), risks to be labeled as something like a ‘hillybilly’.

Hillybilly or not – I don’t care, since I foresee big (and currently unsolvable) societal, ecological and, last but not least, financial problems, if ‘average life span 140’ on a global scale would become a reality.

The main problem: a twice as long lifespan would ultimately lead to a twice as large population of about 15 billion people living on earth, demanding at least twice as much natural resources.

Not so fast, you might say. After all, over the last century or so, the average lifespan in the US for instance doubled already once, since it rose from 40 years (in the late 19th century) to 80 years nowadays (see chart) – and this happened to the benefit of the most. 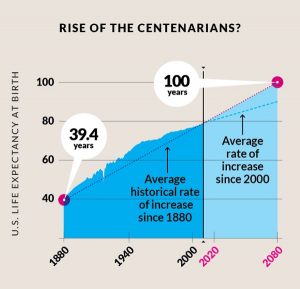 Based on today’s global realities, I still reject the idea, since a twice as large size of earth’s population would require at least twice as much clean water, the single most important resource for life.

Today, more than a billion people globally already have no access to safe water. Guess how this figure might look like with twice as much people around. But for once, having sufficient access to water is not only a problem for the people of poor and already vastly overpopulated countries like India. Water is also a big issue in the developed world.

Born in an alpine country where water was always around in excess and causing regular floods in late spring and summer, I came across the problems of a water shortage for the first time on a trip to Australia’s Hunter Valley, a region that produces first class wines and world class racehorses.

The Aussies had droughts before, but this ‘Millennium Drought‘ that begun in the mid 90’s, was the most severe. Many areas had their driest period on record, news on TV showed farmers and Outback towns trying desperately to survive. The big cities at the coast were also affected. Melbourne, for instance, saw water storages fall from 97% to 33% over the drought. River flows fell by nearly half.

And Australia is by far not the only highly developed country with a severe shortage in the most important resource for life:

were common by the National Weather Service to issue an excessive-heat watch (120° Farenheit equals 49° Celsius) for Los Angeles. California just experienced one of the driest four-consecutive years (2012-2015 – see graph) in history and had to approve a $1 billion emergency drought relief package. Despite a near average rainfall in Northern California in winter of 2016, about 60% of the state remains in severe drought. Groundwater basins and many reservoirs are badly depleted. 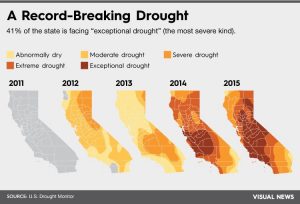 California is not only a hub in the search of life extension (for instance Calico, the ‘C’ of Google’s alphabet, see part I). The ‘Golden State’ at the Pacific Coast experienced something else: The population doubled from around 20 million (1975) to almost 40 million today, making California the most populated state in the US.

In order to have access to clean water, that’s double-trouble. And keep in mind, that a water shortage also effects agriculture and thereby food production or another lifeline of our society: electricity. The combination of political mismanagement and a water shortage caused Venezuela so much trouble, the government simply closed the entire country for five days recently.

Behind this regional water shortages is a global issue and it has very much to do with rising population figures. The man-made record carbon dioxide concentration that might cause further extreme weather conditions and might also be the reason for a devastating ‘climate change‘ on our planet. An issue, we look into in the next part in the ‘case against life extension’. 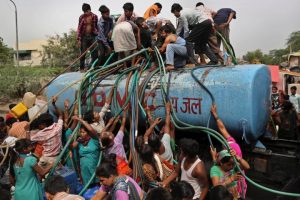