This month, snack-maker Mondelez International made a 23 billion USD bid for chocolate company Hershey that would create the world’s largest candy maker. Update: Mondelez walked away from the deal on 30 August after Heshey rejected raised offer.

Then Danone paid 10,4 billion USD for the takeover of US organic-foods producer WhiteWave Foods and two days ago Unilever acquired Dollar Shave Club for 1 billion USD to get a bigger reach in the men’s grooming market.

Those deals are only the latest in a flood of industry deals as longtime supermarket standbys face pressure to adapt to the new consumers. Industry giants are targeting smaller companies that have tapped into consumers growing desire for simpler, more natural products. This resulted in more than 300 billion USD of mergers and acquisitions in the last years.

And it resulted in an illusion of choice. If you visit your local supermarket, there are literally thousands of products to choose from. However, that “choice” turns out to be an illusion, because the majority of consumer brands you find in the store are all owned by just 10 companies.

Nestlé for instance has at least 29 brands with annual sales over 1 billion USD. The company literally has hundreds of different products in sectors ranging from pet food to soups and sauces. It’s the world’s largest food company by revenues.

Want to buy crackers? Pick up some Ritz, Triscuits, Wheat Thins, Air Crisps, or Premium brand crackers – but know they are all owned by Mondelēz (formerly Kraft Foods).

Buying a chocolate bar? There are seemingly hundreds to choose from, but it’s just the illusion of choice. They pretty much all come from Mars, Nestlé, or Mondelēz (which owns Cadbury).

It’s not just Nestlé. Other companies such as Coca-Cola, Kellogg’s, Mondelēz, PepsiCo, General Mills, Danone, and Mars are also massive. They each own dozens of brands that dominate certain product categories (see infographic). 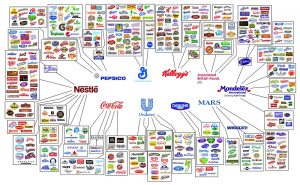 Huge sortiments create an illusion of choice. Most products are owned by just a handful of companies.

Nestlé has at least 29 brands with annual sales over 1 billion USD. 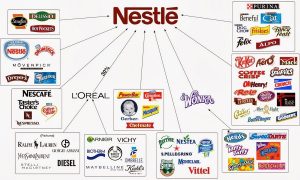