The Brilliant Mind Behind

Today – all around the modern world, ‘Tesla‘ has become a synonym for elegant, electric vehicles produced in Silicon Valley.

The name of the company is no coincidence.. It’s a tribute to Nikola Tesla a brilliant Serbian-American engineer, physicist, electrical engineer and inventor.

It’s worth to know, that Tesla-CEO Elon Musk had nothing to with this choice – and he probably wouldn’t have chosen ‘Tesla’ at all.

The name was selected in 2003 by Tesla’s co-founders – and initial financiers – Martin Eberhard and Marc Tarpenning. A year later, Elon Musk invested in the company and became Chairman. However, Musk’s involvement made Tesla’s long-term strategic vision possible: to produce affordable electric vehicles available for the public. And just this Sunday, Musk announced on Twitter that he is working on a ‘secret master plan, part 2,‘ with details to come later this week.

Since this week also marks the 160th anniversary of Nikola Tesla (he was born on July 10, 1856 to Serbian parents in today’s Croatia), I thought this is an opportunity to take a closer look at this brilliant man:

Tesla filed more than 700 patents for everything from wireless communication to fluorescent lighting.

At 28, Nikola Tesla left Europe for America – to find his scientific and personal counterpart at the time. Thomas Alva Edison – for whom Tesla first worked briefly before they split – was a much more ‘business-minded’ inventor while Tesla was seen then as ‘scientific poet’ with ‘splendid’ but ‘utterly impractical’ ideas.

Edison, on the other hand, measured the value of an invention by the Dollar amount his company could cash-in. For Tesla, money wasn’t the main driver: he saw the purpose of an invention more in the utilization of nature’s force to serve human necessities.

Edison’s least favorite of Tesla’s ‘impractical’ ideas was the concept of using alternating current (AC) technology to bring electricity to the people. Edison insisted that his own direct current (DC) system was superior, in that it maintained a lower voltage from power station to consumer, and was, therefore, safer. The conflict between the two methods and their masters came to be known as the ‘War of Currents’.

But then, who was the better inventor?

Elon Musk’s has his preference: ‘On balance, I’m a bigger fan of Edison than Tesla because Edison brought his stuff to market and made those inventions accessible to the world, whereas Tesla didn’t really do that.’

‘They’re different inventors, but you can’t really say one is greater, because society needs some Edisons and it needs some Teslas’ says Bernard Carlson, author of “Tesla: Inventor of the Electrical Age”.

In the ‘War of Currents’, Tesla’s AC won out. George Westinghouse realized Nikola Tesla’s dream of building a power plant at Niagara Falls to power New York City, and built upon its principles the same system of local power grids we use today.

Tesla was tall, slender and imposing, – a stark contrast to Edison who was known to be a bit of a slob – had an impeccable sense of style and spoke several languages. He had an eidetic memory – also called photographic memory – which meant he could very precisely recall images and objects. This enabled him to accurately visualize intricate 3D objects, and as a result, he could build working prototypes using few preliminary drawings.

‘He really worked out his inventions in his imagination,’ says Carlson.

Here are a few of Tesla’s lesser-known inventions, ideas and contributions to science.

Tesla came up with the concept of the smartphone in the 1920s. Almost 100 years ago, Tesla already understood exactly where communication technology was headed:

Unfortunately, he couldn’t figure out how to create such a device 90 years ago. I guess that’s quite understandable, considering the technology available at the time.

Tesla built what some called an “earthquake machine” and his experiments with it sparked a lot of rumors about what was going on inside his lab. What Tesla created was actually more of an oscillator that could match different vibration speeds and resonances.

He patented the idea for an electric railway. ‘This invention is an improved system or plan of supplying electric current to the motors of street or other cars or vehicles from a central or stationary source of supply, without the use of sliding or rolling contacts between the line conductor and the car motors,’ Tesla explained in his patent.

He invented what was essentially an early solar-electric panel. His design involved a metal plate on an antenna that was wired into a capacitor on the ground.

He designed a remote-controlled boat. Tesla used radio waves to control the boat, and even directed it around a pool of water in Madison Square Garden. People speculated about its potential use in warfare, according to Bluebird Marine Systems. (Hello drone strikes.)

He patented a flying machine that could perform vertical takeoffs – Tesla called it a “helicopter-plane.”

Nikola Tesla, who contributed a great deal to the development of electric systems and communication technology during his lifetime, died in New York in 1943.

1921: Nikola Tesla hung out with Albert Einstein when scientists took a tour of a wireless station in New Jersey. 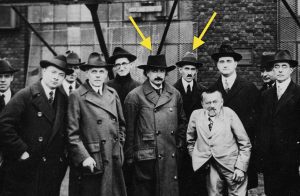 There’s a plaque at the New Yorker Hotel (where he died in room 3327 in January 1943) to honor him, but it’s fair to say he’d be more impressed by a real invention as a modern electric car named after him: 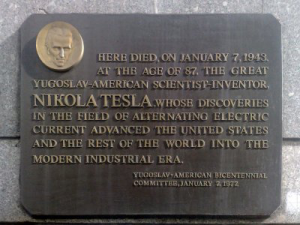 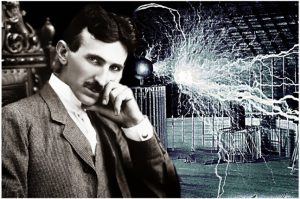 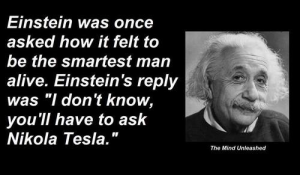