Gold is often labeled as the ultimate ‘safe haven’ for investors, because it usually gains in value, when other asset classes fall.

If you take a look at the chart below,  you see what I mean: when the financial crises started after the collapse of Lehman Brothers in September 2008, stock prices fell substantially over the next months, while gold started to rise from 780 USD in 2008 to a record of about 1900 USD in 2011. 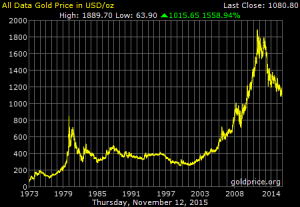 When referring to gold prices, it is standard to use a USD per ounce quotation. An ounce is 31 gram.

After the financial crises seemed to be contained and stocks made a comeback, gold fell again and notices at about 1100 USD today.

Had you instead bought gold for 6400 USD, the value today would be substantially over 100’000 USD.

Do I get your attention, that gold is more than jewelry and can be a safe and profitable investment? If so, I will tell you the first thing you need to know, when it comes to gold on financial markets:

When surfing the web for gold-investments, you will encounter many strong advocates for the precious metal, so called ‘gold bugs’, who are predicting gold prices of 5000 or 10000 USD in the coming years.

And you will read countless conspiracy theories about secret but powerful forces in finance, politics and central banks who constantly manipulate and suppress the price of gold. Well, I can only advise you to be very careful in believing too much of this.

Even without juicy promises and conspiracies, gold is a fascinating investment full of myths humans are projecting to this magic metal for thousands of years:

With gold’s first use as money, so the myths about gold began to emerge. Enter King Midas – he lived long before Croesus, when gold was still ‘only’ a metal. The poor fellow had the bad fortune that everything his hands were touching would turn into gold (to this day reflected in the expression ‘midas touch’). When Midas accidently turned his own daughter into gold, he rushed to the nearby river Pactulos to wash his hands – and turned the river’s sandbanks into gold – and this gold was then discovered and used as money by Croesus many years later.

Now, whether it happened that way or a little different – it only underscores the fascination of gold since ancient times.

Fast forward to 1849, another remarkable year for gold.

James Wilson Marshall was constructing a sawmill along the American River, northeast of San Francisco in California, when he discovered a gold nugget in January of 1848. He started the California gold rush.

There was no internet around, so it took a while to spread the news. But in 1849, ‘Gold! Gold! Gold!’ was yelled across the land. Thousands sold their houses, left jobs and families behind and headed west to the American River – gold fever was out broken.

By far, not every gold-digger was lucky, but many stayed in California and this ‘ready-to-take-a-risk’-attitude became the DNA of California, essential for the rise of the ‘Golden State’ to one of the most successful, creative and innovative regions in the world. The famous San Francisco football team, the 49-ers, is named in reference to the California gold rush of 1849.

Fast forward to 1933 – when gold became too precious to deal with.

The ‘black tuesday’ at the New York Stock Exchange of October 29, 1929 started a financial crises and – courtesy of wrong decisions by the central bank – transformed into a full blown economic disaster, known as the Great Depression who culminated in March of 1933.

In this environment, you surely have guessed it, the demand for the ultimate ‘safe haven’ gold was rising. In fact, the wave of gold buying became so huge, that the Federal Reserve could no longer convert USD to gold. People’s gold became too precious to deal with and this had to be stopped instantly, so the US Government reacted like a dictatorship:

By executive order 6102 of April 5, 1933, President Roosevelt declared the possession of gold in the US illegal. People had to deliver all their gold back to the Federal Reserve within a month! Those who opposed to do so, were facing 10 years in prison.

By order of the President: Give us back your gold!

A big portion of this confiscated gold then was stored in the famous Fort Knox in Tennessee, untouched for decades. It took 42 years until 1975 when the possession of gold in any quantity was finally legalized again in the US.

That’s enough of history, we now move to the factors, that determine the gold price in the future and instruments to invest in the magic metal. You can read this here in the next chapter: http://www.theleader.ro/models-and-weddings/