What is behind wrong decisions

The human brain is capable of 1016processes per second, which makes it far more powerful than any computer currently in existence.

But that doesn’t mean our brains don’t have major limitations. The cheap calculator can do math thousands of times better than we can, and our memories are often less than useless  – plus, we’re subject to cognitive biases, those annoying glitches in our thinking that cause us to make questionable decisions and reach erroneous conclusions.

It’s important to distinguish between ‘cognitive biases’ and ‘logical fallacies’.

A logical fallacy (see ‘Gambler’s fallacy’) is an error in logical argumentation. A cognitive bias is a systematic error in thinking that affects the decisions and judgments that people make.

Sometimes these biases are related to memory. The way you remember an event may be biased for a number of reasons and that in turn can lead to biased thinking and decision-making. In other instance, cognitive biases might be related to problems with attention. Since attention is a limited resource, people have to be selective about what they pay attention to in the world around them.

How Do Cognitive Biases Work?

When we are making judgments and decisions about the world around us, we like to think that we are objective, logical, and capable of taking in and evaluating all the information that is available to us. The reality is, however, that our judgments and decisions are often riddled with errors and influenced by a wide variety of biases. The human brain is both remarkable and powerful, but certainly subject to limitations. Cognitive biases are just one type of fundamental limitation on human thinking.

A cognitive bias is a type of error in thinking that occurs when people are processing and interpreting information in the world around them. Cognitive biases are often a result of our attempt to simplify information processing. They are rules of thumb that help us make sense of the world and reach decisions with relative speed.

Unfortunately, these biases sometimes trip us up, leading to poor decisions and bad judgments.

If you had to think about every possible option when making a decision, it would probably take a lot of time to make even the simplest choice. Because of the sheer complexity of the world around us and the amount of information in the environment, it is necessary sometimes to rely on some mental shortcuts that allow us to act quickly.

Here are a few common types of cognitive biases:

A confirmation bias is a type of cognitive bias that involves favoring information that confirms previously existing beliefs or biases. For example, imagine that a person holds a belief that left-handed people are more creative than right-handed people. Whenever this person encounters a person that is both left-handed and creative, they place greater importance on this “evidence” supporting their already existing belief. This individual might even seek “proof” that further backs up this belief while discounting examples that do not support this idea.

An availability heuristic is a mental shortcut that relies on immediate examples that come to mind. When you are trying to make a decision, a number of related events or situations might immediately spring to the forefront of your thoughts. As a result, you might judge that those events are more frequent and possible than others. You give greater credence to this information and tend to overestimate the probability and likelihood of similar things happening in the future.

It’s called a fallacy, but it’s more a glitch in our thinking. We tend to put a tremendous amount of weight on previous events, believing that they’ll somehow influence future outcomes. The classic example is coin-tossing. After flipping heads, say, five consecutive times, our inclination is to predict an increase in the likelihood that the next coin toss will be tails — that the odds must certainly be in the favor of heads. But in reality, the odds are still 50/50. As statisticians say, the outcomes in different tosses are statistically independent and the probability of any outcome is still 50%.

The self-serving bias refers to our tendency to take personal credit for success while blaming outside sources for our failures. Essentially, we tend to believe that our successes are due to internal traits and talents, while our failures are caused by variables outside of our control. We don’t always interpret these things objectively. Cognitive biases such as the self-serving bias often interfere with how we evaluate information and arrive at decisions.

When people are trying to make a decision, they often use an anchor or focal point as a reference or starting point. Psychologists have found that people have a tendency to rely too heavily on the very first piece of information they learn, which can have a serious impact on the decision they end up making. In psychology, this type is known as the anchoring bias. Imagine that you are trying to get a pay rise. You might hesitate to make an initial offer, but research suggests that being the first one to lay your cards down on the table might actually be the best way to go. Whoever makes that first offer has the edge since the anchoring effect will essentially make that number the starting point for all further negotiations.

Reward and Punishment Response Tendency – This means that people respond highly to incentives, whether they are positive or negative. If you look closely at human behavior, the majority of it is incentivized. Munger says this is crucial in understanding what motivates human behavior.

Liking Tendency – We tend to respond to and listen to the ideas of people we like and because we like them we tend to ignore their faults.

Disliking Tendency – We tend to ignore the virtuous facts of people we dislike. We also distort the facts in order to fit our view of dislike for that individual.

Doubt/Avoidance Tendency – If we aren’t sure if a decision is the right one, we tend to make a hasty and ill-informed decision as a way of alleviating our doubt.

Inconsistency-Avoidance Tendency – We fear change, and our habits are hard wired to our brain. “You can’t teach an old dog new tricks”.

Influence from Mere Association – We are easily manipulated purely by association with others. The media is big in exploiting this tendency.

Simple Pain Avoiding Psychological Denial – Life can be too painful at times, so we use denial as a coping mechanism to mask what’s truly going on.

Excessive Self-Regard Tendency – We all think we are above average. Mathematically this is impossible.

Deprival-Superreaction Tendency – Loss aversion. This is the concept that people would much rather avoiding losing something than gaining something. This one is a major reason why many people are stuck in their circumstance. They are afraid of losing what they have.

Social-Proof Tendency – We tend to think and act like those around us. Look at a group of friends. They think, talk, and act the same way. Some scientific research studies say they even begin to look alike after time. Be careful of the company you keep.

Use-It-Or-Lose-It Tendency – Too many people learn a skill to pass a test or qualification rather than learning it thoroughly in order to fully understand the concept.

Authority-Misinfluence Tendency – Following orders just because the words come from an authority figure. Question your leaders: Question it all!

Twaddle Tendency – Spending too much time on silly things. (This one is for those of you spending hours a day on ‘social’ media).

Reason- Respecting Tendency – This is where people want the answers to something, but don’t care to know the background information or reasoning to gain a better understanding. 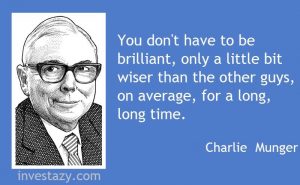 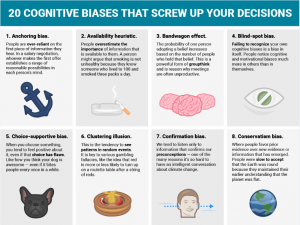 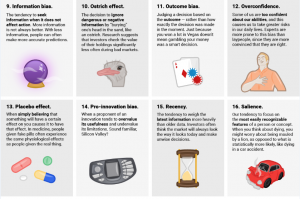