Crude oil fell for a fourth day in a row yesterday – and settled below 50 USD/barrel – by concerns about Chinese growth (see Monday’s post) and the outcome of next week’s vote on Britain’s possible EU-exit (the campaign for the UK to leave the EU has a significant lead, a poll showed that 47% of likely voters said they will opt to leave the EU with 40% who want to stay).

This recent setback in oil prices overshadow new signs of an even further recovery (oil already came back from the February low’s below 30 to above 50 USD in late spring) by the latest upbeat forecast for oil demand growth from the International Energy Agency, which said the oil market is essentially balanced after two years of surpluses.

That’s why ‘Superior Energy’-CEO David Dunlap remains bullish and anticipates prices will hit 60 USD per barrel by the end of the year.

“In the second half of 2016 we’re going to continue to see prices migrate up as the market begins to realize that non-OPEC production is coming down, including shale production in the US, and we’re going to be getting closer and closer to that supply-demand balance”.

Another view has John Kilduff of Again Capital. He doesn’t expect higher oil and thinks crude has peaked around 50 USD per barrel.  “I think we’re at a point here where it’s going to be hard to continue. A lot of headwinds.”

Well, forecasting is hard, especially when it comes to oil. 2 years ago, when crude oil traded at prices of 105 USD/barrel, Bloomberg ran an article titled “Oil Topping $116 Seen Possible as Iraq Conflict Widens”, others forecasted that oil prices could hit 118.75 USD/barrel in ‘the coming weeks’. The reality, as it turns out, was oil prices fell to less than 50 USD/barrel within 6 months.

But this post has no intention to make fun of others, especially since I made horrible predictions myself (about AMZN running out of cash, to name just one of them). Today’s piece should help to understand why oil prices can fluctuate that much.

Every day, the world consumes 93 million barrels of oil, which is worth over 4.5 billion USD.

Oil is one of the world’s most basic necessities. At least for now, all modern countries rely on oil and its derivatives as the backbone of their economies.

However, the price of oil can have significant swings. These changes in price can have profound implications depending on whether an economy is a net importer or net exporter of crude.

Ultimately, oil prices fluctuate because of changes to supply and demand, but the challenge for investors is that there are multiple factors at play that can affect those fundamentals.

Many of them are interconnected. These include weather events, supply interruptions (such as worker strikes or spills), broader demand trends such as the emergence of renewable energy, OPEC decisions, or other events that can have an immediate effect on supplies.

There are also meta factors, such as the “fear” that a future event may happen that could in turn affect supply and demand. This is where geopolitical risks get priced in, such as potential escalation of conflict in the Middle East or future election results of oil exporting nations.

Information and forecasts can also play a role.

Imagine being an oil producer in early 2014, hearing some of the bullish reports above. Would you, or would you not invest in a project that had a breakeven of 60 USD/barrel? Even a significant oil price fluctuation of +/- 30% would still have you come out on top.

However, as in the situation in 2014, this would have actually increased margin production, which would have only added to the glut in supply.

If you are looking for further answers to questions business leaders asking about the state of the oil market, I would recommend this interesting piece titled ‘Black Swans & Barrels: How To Think About The Future Of Oil Prices’ by Scott Nyquist of McKinsey & Co.

The infographic – provided by Jones Oil and Visual Capitalist – is here to help understand the many different issues that can impact global oil prices. It covers supply and demand, weather, technology, geopolitics, as well as other factors that make oil prices fluctuate: http://www.visualcapitalist.com/oil-prices-fluctuate/ 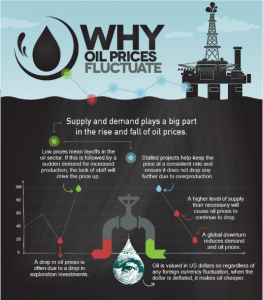