‘ I don’t think anybody has a very good model of what makes gold prices go up or down.’

What Federal Reserve Chair Janet Yellen said at her confirmation hearing in November 2013, was instantly opposed by financial analysts.

Of course, they would have good models for gold. According to these models, the following factors are decisive:

You only have to feed your computer with this data – e voila – you know if gold goes up or down next.

In the world of finance, the belief to be able to reduce complexity via models is quite common. But this focus is tricky and can lead to costly miss judgments. The LTCM-debacle in 1998 and the financial crisis of 2008 had both it’s roots to a certain degree in failed models to determine the risks of russian bonds respective the true value of US housing mortgages.

And in the case of LTCM, two Noble Prize winners were involved. The entire story is recounted in Roger Lowenstein’s book, ‘When Genius Failed‘, I recommend you to read if you want to know more about.

Don’t get me wrong, the above mentioned factors – from inflation to geopolitics- have indeed a mayor influence for the price of gold.

If you want to determine the expectation for gold based on economic data, I would advise you to favor the real yield as an indicator. The real yield is calculated by the rate of a 10-year government bond minus the inflation rate. The higher the real yield, the less attractive is gold and vice versa.

But I would also advise you to have the bigger picture in mind to understand the movements of gold.

As with every open traded product, gold prices are moving basically according to the law of supply & demand.

The total of all the gold digged out from grounds of this earth since Croesus, is about 185.000 tones. It might seem huge, but is actually pretty small due to gold’s very high density. If every single ounce of this gold were placed next and above to each other, the cube of pure gold would measure 21 meters in any direction. Many communist-area housing blocks in Bucharest are bigger than that.

There are four mayor buyers.

These private persons buy gold not only to invest, but for many different reasons. When it comes to gold, irrationality belongs to the human nature since Croesus used gold as money more than 2500 years ago.

To clarify: irrationality by no way should be percepted as a negative, but as a human behavior that doesn’t fit necessarily into the models of financial institutions.

Private persons around the world ask for gold to feel safe or to please a loving person with a gift, regardless of current stock market levels.

‘Darling, I’d like to buy this golden bracelet for you, but you have to wait till the Dow Jones rises and gold gets cheaper’ would most likely be the end of a relation.

Wedding traditions in India are an almost infinite source for gold demand.

In asian cultures, in India for instance, the demand for gold is based rather on traditions than inflation figures, although the value of the indian rupia may play a role, but tradition tends to prevail. Brides are given enough jewelry ‘to break their neck’, the ‘Economist’ described this habit. With 1.2 billion inhabitants and soon to surpass China in population, there is some substantial demand to come out of India, pretty much without consulting a financial model first.

Now, what does this mean for the price of gold? Unfortunately, I can’t find my crystal ball to tell you events in the future. What I can say without the ball is, the we can assume that the human fascination for gold will remain and the need for safety will not diminish very soon. This alone should be enough to consider a long term investment in gold of about 5 to 10% of your assets.

If you favor financial models over weddings as an indicator, here are the gold price-predictions in USD per ounce by mayor banks for 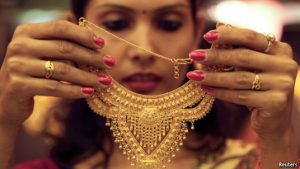 When you consider to invest in gold, there are four mayor instruments available. How to find the right tone, is the topic in the next chapter: http://www.theleader.ro/paper-physical/