If China Becomes Another Japan, the World is In Trouble

At the ‘Strategic Investment Conference 2016’ recently held in Dallas, geopolitical forecaster and strategist George Friedman said: ‘China is like Japan in 1989′.

There are indeed many similarities between China today and Japan in the late 80’s, before Nippon went bust: a reliance on investment- and export-led growth; big current account surpluses; a real estate bubble (that led to highly indebted owners, many of them committed suicide when house prices collapsed in Japan after 1990); sky-high valuations in the stock market and last but not least, an ageing workforce.

As if Japan’s fate wasn’t bad enough – japanese companies focused on cutting debt and shifting manufacturing overseas, wages stagnated and consumers avoided spending. That led to 20 years with no nominal growth and falling prices, creating a deflation (on many of these parameters, China today is much worse than Japan in ’90).

As for the real estate crisis, Chinese home construction growth rates had reached 10% of GDP and all previous episodes of countries in which peak residential investment approached 10% were followed by a multi-year contraction of homebuilding.

This suggests that changing China to a consumption-oriented economy is likely to be much more difficult.

The impact on the rest of the world of a big slowdown in Chinese growth will therefore be much worse than the impact of the bust in Japan. A Citigroup-report says: ‘Should China enter a recession – and with Russia and Brazil already in recession – many other emerging markets will follow.’

Citigroup also considers that: ‘the advanced economies or developed markets will not have enough resilience to prevent a global slowdown and recession.’

Another bearish view about China comes from investor George Soros – who’s currently also piling into gold and shorting US-stocks: ‘China continues to suffer from capital flight and has been depleting its foreign currency reserves while other Asian countries have been accumulating foreign currency.’

He also worries that new troubles will arise in China partly because the nation doesn’t seem willing to embrace a transparent political system that he contends is necessary to enact lasting economic overhauls.

‘China is facing internal conflict within its political leadership, and over the coming year this will complicate its ability to deal with financial issues.’

After Soros questioned Chinese economic stability – and positioned himself accordingly by shorting the Yuan – Xinhua news agency, China’s biggest and most influential media organization, only confirmed the chinese tradition of not trusting free market forces and slammed Soros for his views.

Xi Jinping is China’s undisputed ruler. He is not only party leader, head of state and commander-in-chief, but is also running reform, the security services and the economy. But the ‘Chairman of everything’, as the ‘Economist’ described him, has many issues to solve, a task not even ‘Superman’ might be able to fulfill on its own.

The current economic situation in China is by far worse than the official figures and statistics provided by Chinese economic planners and government bureaucrats would make you believe. Skeptics of China’s often gravity-defying economic statistics only need to look at the recently announced investigation of the head of the country’s statistic agency and the recently arrested 300 people that work in the government’s statistics department – they have now admitted that the numbers they report have been false.

A Chinese recession is the most likely scenario in the next few years due to the rising excess capacity in many sectors, excessive leverage in the private sector and bubbles in the residential real estate and equity markets. This toxic mix is the classical recipe for a recession in capitalist market economies and very unlikely to be different for China.

According to the ‘New York Times’

‘China knows that it has to shut down steel mills, coal mines and other industrial units that are producing much more of just about everything than the world needs, depressing prices and hurting businesses and workers everywhere. But the government has been reluctant to act for fear of throwing millions out of work and damaging Chinese banks that have lent money (to what are essentially zombie businesses) kept alive by government policies.’

Others emphasize the massive build-up of debt, climbing to 247% of GDP according to ‘Bloomberg Intelligence’. With the prospect of much worse numbers since productivity has been falling and the economy requires more and more debt to generate growth. David Lipton, IMF’s first deputy managing director said in a speech this weekend to the China Economic Society Conference in Shenzhen:

‘Corporate debt remains a serious – and growing – problem that must be addressed immediately and with a commitment to serious reforms,’

And finally, the Organization for Economic Cooperation and Development (OECD), forecast that air pollution may shrink the size of China’s economy as much as 2,5 % by 2060 as a result of workers taking sick days, which will increase medical bills and reduce agricultural output and the rate of premature deaths would triple.

It’s only fair to say, that over the last decades, the Chinese government has lifted hundreds of millions of people out of poverty to a reasonable living standard. Thereby, China has become a crucial global economic factor and is – to name just one of countless other examples – for instance the world’s largest robotics market with purchases making up 25% of the global total.

For the next decades, however, China is facing huge challenges – aside the mentioned macro-economic issues. These challenges are more and more of political and social nature and it would be a blessing for the entire planet if somehow they will be able to manage them.

Unfortunately, there is reason to believe, this won’t happen in a smooth way. In the study ‘The Road to 2040’ published by geopoliticalfutures.com you’ll find this prediction:

‘The decline of China’s competitiveness in the export market continues, high unemployment will become a significant challenge to the Chinese president. The regime will attempt to survive the economy’s downward spiral by tightening its grip on power and sliding back into dictatorship.’

Could this prediction become a reality? Well yes, recent developments and news out of China are worrisome and do anything but strengthen the confidence in Chinas rulers:

Further disturbing similarities between the authoritarianism and thought control of one of the most awful periods of modern history and Xi’s China today let people ask questions as far as: Is China Returning to the Madness of Mao’s Cultural Revolution?

In case you like to follow events in China more closely, I recommend the South China Morning Post (SCMP). The long established paper is based in Hong Kong – outside Beijing’s censor reach – and offers a balanced view on issues in China. The SCMP was just bought by Alibaba founder Jack Ma, who promised to maintain the paper’s editorial independence. One of Ma’s first changes at the paper was removing the paywall and giving free access to its online editions so can judge for yourself. 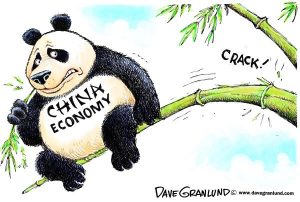