Every day, more than 1 billion people go to bed hungry and almost 3 billion people face water scarcity for at least one month every year, points out the WWF.

Despite the global birth rate falling to 2,5 children per woman, population growth will continue for decades, to 8,1  billion people by 2025 and 9,6 billion in 2050, according to the UN.

The South Sudan, for instance, not only has the highest population growth worldwide, the country is also the ‘leader’ in the Fragile States Index composed by the UN that measures vulnerability to conflict or collapse.

Population growth ‘poses a bigger threat to poverty reduction in most African countries than HIV/AIDS’, declared the UN Population Fund.

So you don’t have to be a genius to predict, that the combination of overpopulation, instability and poverty – and most likely with ever lurking tribal or religious conflicts/wars – that shatters any perspective for a decent life will lead to a new and massive wave of people seeking a better chance somewhere else. Expect millions of Africans will soon knocking on Europe’s doors.

The UK has a projection of a population growth of 10 million by 2039, with immigrants making up half of the increase. Great Britain will thereby become Europe’s most populous country by 2050, and by 2080, the UK’s population is projected to surge past 85 million.

The international migration figures are already sharply up; reaching 244 million in 2015, up 40% since the beginning of the century. The fastest recent migration growth has been in refugees – generally forced by climate change, poverty and/or conflict – creating the biggest refugee crisis in Europe since World War II. Especially when you consider, that in many overpopulated countries in Africa – or India, Pakistan or Bangladesh just to name a few –  even basic tasks like scaling up the food system will be challenging due to denuded soils and climate change but also because agricultural land is being swallowed by expanding cities.

Out of Earth’s population of more than 7 billion today, more than 50% now live in urban areas, cities or megacities. The population of the greater Mexico City region is larger than that of Australia and Chongqing, a collection of connected urban enclaves in China, is spanning an area the size of Austria.

Worldwide, the fastest growing megacities are:

The main causes of overpopulation are illiteracy and lack of family planning. Most developing nations have large number of illiterate people that live below the poverty line and have little or no knowledge about family planning. Getting their children married at an early age increase the chances of producing more kids. Those people are unable to understand the harmful effects of overpopulation and lack of ignorance prompts them to avoid family planning measures. Money spent there in education would be a wise spent!

The main consequences of overpopulation are the depletion of resources (see ‘The Case Against Life Extension – Water) and a degradation of the environment. Overpopulation could even lead to wars as conflicts over water are becoming a source of tension between countries, since the Earth can only produce a limited amount of water and food, which is falling short of the current needs.

Most of the environmental damage being seen in the last fifty years is because of the growing number of people on the planet. They are cutting down forests, hunting wildlife and with the overuse of coal, oil and natural gas, it has started producing some serious effects as global warming and climate change (see ‘The Case Against Life Extension’ – Climate).

Overpopulation is further damaging our planet through:

I’m an expat – from a country where awareness towards nature is very high – now mostly living in Romania, a country where the majority of people don’t give a damn about ecological matters – but suddenly are very attentive when financial implications are mentioned. That’s why I close with the most severe economic consequences of overpopulation.

Rise in Unemployment: when a country becomes overpopulated, it gives rise to unemployment as there fewer jobs to support large number of people. Rise in unemployment gives rise to crime as people will steal various items to feed their family and provide them basic amenities of life.

Further financial consequences of overpopulation are:

Despite the shitty quality of living in overpopulated areas, the cost of living will nonetheless rise as the difference between demand and supply continues to expand, resulting in soaring costs of various commodities including food, shelter, security and healthcare.

According to the just released Mercer’s 2016 Cost of Living Rankings, Hong Kong tops the list of the most expensive cities worldwide and is followed by … Luanda (Angola), a city that due to astronomical security and import costs is now more expensive than Zurich or Singapore. The survey also reveals that life in two other African cities (Kinshasa and Ndjamena, the capitals of Congo and Chad) is now pricier than in New York City and life in Lagos (Nigeria) today is more expensive than in London..

These facts, however, are based solely on ‘natural’ causes of global population growth. If science and medicine would be successful in their pursue of life extension to an average life span of 140 years, the global population would double over the next generations to about 15 billion.

And the pace of the above mentioned facts as poverty, migration, conflicts over natural resources, financial costs and the destruction of the Earth, would double too.

The price of overpopulation: a deadly mix of polluted water or air (as pictured in Delhi, India, the globally most polluted city in 2014) and unaffordable costs of living in many African megacities like Lagos who recorded the fastest population growth worldwide. 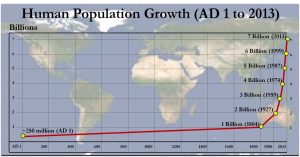 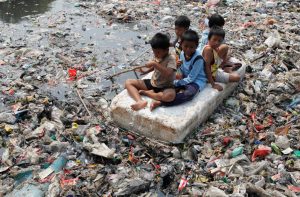 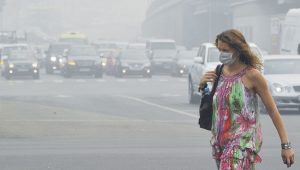